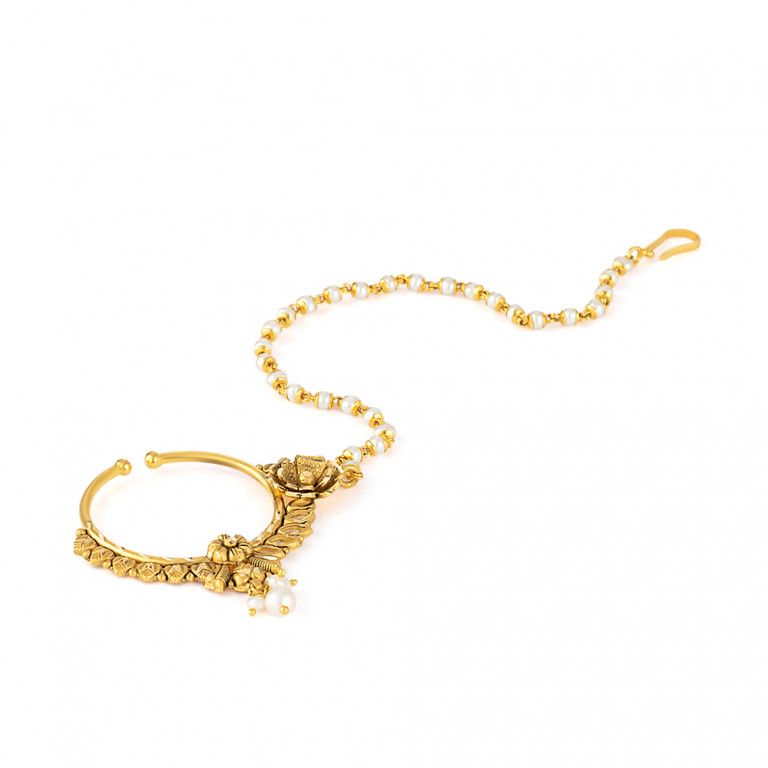 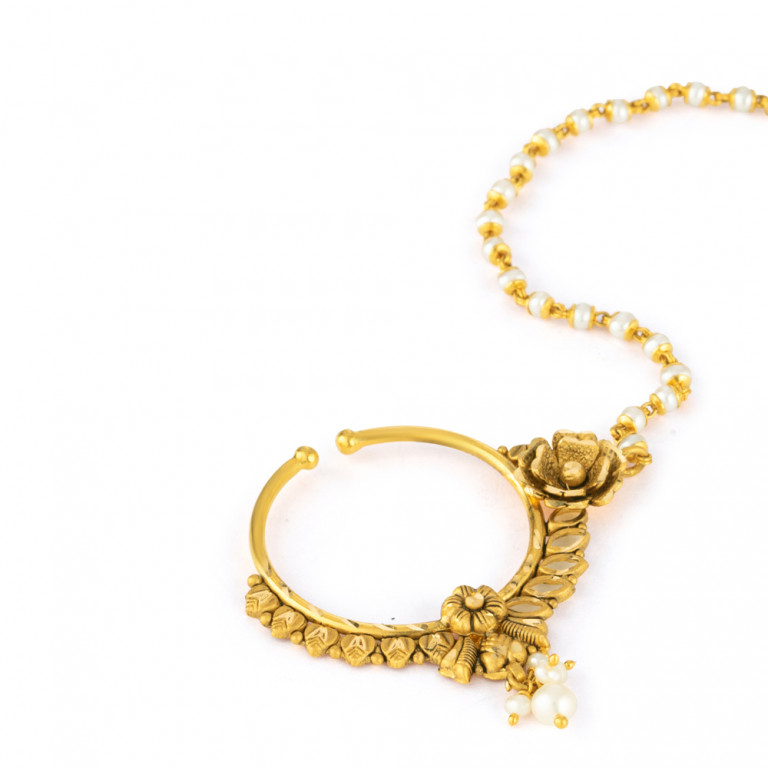 What is a Bridal Nath?

A common phrase in India that will follow up in a conversation about jewellery for a bride is the term “Solah Sringar”. Solah Sringar refers to the set of ideas or rituals one had to follow when one became a bride. The word Solah means sixteen. As the name suggests, there were sixteen steps to a bride getting ready. These steps involved wearing adornments, with each having a significance of its own. It was important that a bride follow these steps as she stepped into a new chapter of her life. Solah Sringar comprises of different pieces of jewellery to be worn. Although in today’s life it is not a compulsion to adorn oneself with so many pieces, wearing as many pieces from the guide like Solah Sringar, is a game-changer for sure.

One of the pieces from the Solah Sringar is the bridal nath.

A bridal nath is a nose pin, often accompanied by a chain extending itself, which one has to attach behind their ear. Depending on which part of India you came from, the Nath is worn in the left or the right nostril. India is a boiling pot of many cultures and traditions. These would then have an influence on the aesthetics of that particular community. The significance of a bridal nath changes from community to community. Throughout India, the designs of these nath change. While the core ideas of a nose pin remain the same, there are variations as you move from one community to another. Some of the designs feature huge circular hoops, passing through one’s nostrils, perhaps with added design motifs in the hoop. These designs would often have gemstones mounted in them. A lot of naths usually come with a chain attached to them. Naths are often fashioned from gold with an array of gemstones, diamonds, pearls, enameled pieces, beads, and uncut polki. Even the chains of nath can be dramatic.

By no means is a nath a subtle piece of jewellery. It is a bold ornament, acting as a canvas to the many gemstones and motifs one can adorn it with.

At PureJewels, we provide all the ornaments that will make your special day even more memorable. Our naths are sure to uplift your bridal jewellery game even further.

Our nath are beautifully fashioned in 22K yellow gold, with a chain to attach it behind your ear. The hoop feature three big beads finished with an antique look. These beads signify the past, present, and future, just like a three-stone ring. The middle bead signifying the present, which is always the most important segment of one’s life, is textured alluringly. Along the chain, little gold beads also finished with an antique look, cascade till the very end. Attached to these beads, are traditional Indian motifs almost subtly representing a Toran, which are often hung outside one’s doorsteps on auspicious days.

To ensure that its comfortable for the bride, the piece is lightweight in nature. A nath is graceful piece that should not cause any irritation.

Due to its delicate positioning and one’s comfort, it is advisable to come to the store and try it on. If you have any other design in mind, we can always cater to that as well. All our pieces can be customized according to your needs.